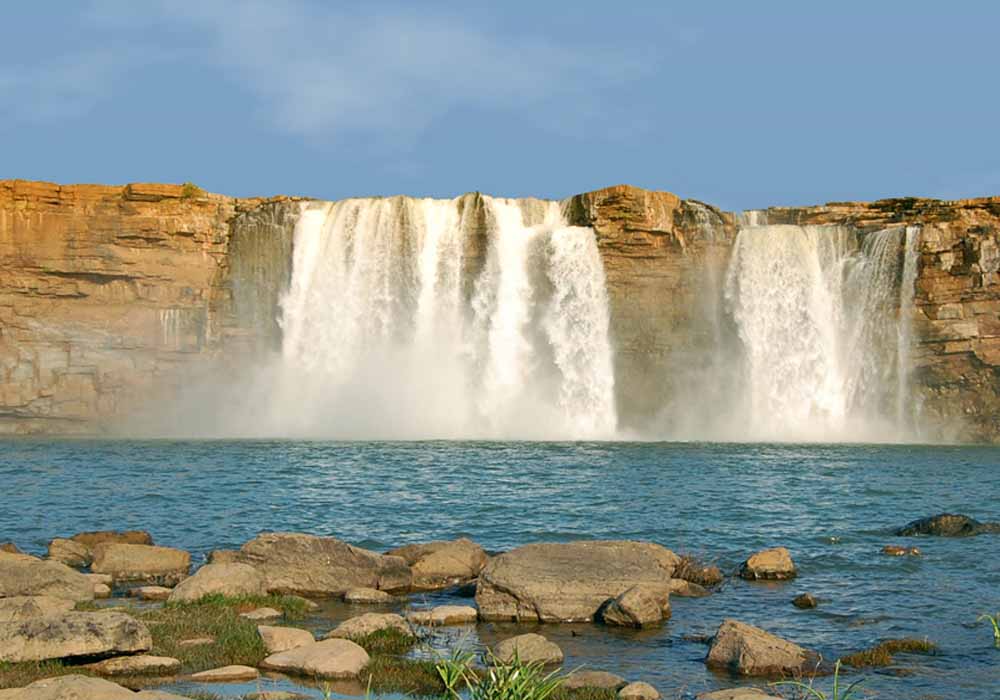 Must Visit places in Chhattisgarh

Chhattisgarh is a "Full of Surprises", it is slowly growing into one of India's most popular holiday destinations. The oldest tribes of India dwell here, some of them for almost 10,000 years. A blend of culture, arts and religion of the local and tribal people, Chhattisgarh exhibits the instance of ancient India. Still in its nascent stage though, Chhattisgarh is one of those off-the-beaten-track tourist spots in India that are slowly gaining more popularity through word-of-mouth. Home to plenty of gushing waterfalls, ancient temples and monuments, dense forests, a veritable sprinkling of flora and fauna, and a culture that is still reminiscent of the age-old history and traditions of the state, Chhattisgarh has everything you could possibly be looking for in an ideal tourist spot where you can make memories that will last you a lifetime.  Many of the caves and monuments depict the sheer talent once possessed by local architects and craftsmen. The lush green forests are idle sites for tourists for indulging in trekking and safaris and absorb the ambience of different plants and animals species. The greenery and the waterfalls among the hilly regions of the state is a scene all admire. The dense forest obscure the ancient caves bearing the evidence of ancient human existence. One such cave is Kailash cave located into the thick forests around Tiratgarh waterfalls. The degree of devotions expressed by worshippers is demonstrated in the temples in Chhattisgarh which are not only places to worship but also memorials of ancient India.

The Capital Of Chattisgarh is Raipur is the most visited town in the state. Replete with plenty of historical sites as well as lakes, museums and parks, the capital of the state is a well-maintained city with wide roads and friendly locals who beckon travelers all year round. The most important tourist attraction in Raipur is the Mahant Ghasidas Memorial Museum, which was built in the 1800s by Raja Mahant Ghasidas, and is now a repository of the rich archaeological and cultural history of the state. Other must-visit places in the city include the Purkhauti Muktangan Museum, the Rajiv Smriti Van and Urja Park, and the Vivekananda Sarovar. The Purkhauti Muktangan Museum is a museum-cum-park which has on display various handicrafts and artifacts collected from the ancient tribes living in the area. The Vivekananda Sarovar gets its name from Swami Vivekananda, who was said to have lived very close to the lake whenever he visited Raipur, thus giving birth to the name. Boasting of a gigantic statue of Swami Vivekananda right in the middle of the lake, this place draws tourists and locals alike to spend a lazy evening by the lake, or even go for a boat ride amidst the crystalline waters of the Sarovar. Another important temple in Chhattisgarh that is a must-visit is the Bhoramdeo Temple in Bhoramdeo. Dedicated to Lord Shiva, this temple is often referred to as the Khajuraho of Chhattisgarh, and is an outstanding work of fine architecture and construction. Built back in 7th century, the temple features erotic sculptures on its faÃ§ade, akin to the Khajuraho Temples in Madhya Pradesh. Chhattisgarh is blessed with naturally scintillating waterfalls, with the most popular among them being the Chitrakot Waterfalls. Nicknamed the "Niagara Falls of India", the Chitrakot Waterfalls holds the record for being the widest waterfall in India, and has been classified as a prominent geo-heritage site. Majestic Waterfalls of Chhattisgarh The many large and small rivers in Chhattisgarh, along with the hilly terrain, make this a haven for waterfall lovers. The state has over forty waterfalls of various types and sizes, and most of them are open for tourists. The most famous are the Amritdhara waterfall located in Koriya district that is a part of the Hasdeo river. It forms a beautiful mist when it falls and is very popular with tourists. Chitrakote Falls is another famous waterfall, also known as the Niagara of the East because of the large size and thundering waters. Akuri Nala, Gavar Ghat, Tirthagarh and Tiger Falls are some other popular tourist destinations. Untouched Wildlife of Chattisgarh The rainforests of Chhattisgarh are considered to be the densest forests outside the Amazon and are home to some spectacular animals like water buffalos, tigers, leopards, antelopes and many birds. The diverse terrain including rainforests, grasslands, wetlands and deciduous forests makes it home to animals living in all types of ecosystems. The government has constructed some lodges and resorts near forest reserves to encourage tourism, and they offer very attractive deals. Achanakmar, Sitanadi and Bhairamgarh wildlife sanctuaries are among the most popular. Temples and Monuments in Chattisgarh Though the state of Chhattisgarh is comparatively new, the region has a centuries-long history and is a trove of ancient architectural styles. The temples of Chhattisgarh include Ram Tekri, Swastik Vihar, Gandheswar Temple, Laxman Temple and Shivani Temple and most show a mixture of Central and South Indian styles of architectures. There are also some caves, some of which like Kotumsar cave, Kailash gufa and Singhanpur cave have prehistoric paintings and art. Kawardha Palace and Ratanpur fort offer glimpses of Chattisgarh's imperial past and are located in scenic spots that are a favourite with those looking to unfold the history of the region. Tribal Culture of Chhattisgarh Like the forested North-Eastern region of India, the central plateaus and forests are home to a large number of tribes. There are over 25 recognised tribes in Chhattisgarh, and they each have their distinct cultural and linguistic traditions. The Gond, Baigha, Munda and Muriya tribes are some of the dominant groups in the state. The anthropological museum located in Bastar gives a detailed history of the cultures and lifestyle of the tribes of Chhattisgarh and is a must visit for those looking to explore the culture of the state. The distinctive dressing style, dialects and dances differentiate the tribes, but they are united by the geographical proximity and shared cultural practices.

Transport connectivity like rail, road and air is very well. Many unexplored destinations offering natural beauty. State government is looking to expand tourism, so it offers many attractive schemes and discounts

The temperature during summers is very high. Many cities are not very developed and may lack tourist facilities.

Culture of Chhattisgarh Maize, wheat and jowar constitute the staple food along with the special recipe called bafauri which is prepared with chana dals. Chattisgarh is abundant with fruits that are gifted by the forests here. Geography of Chhattisgarh This landlocked state is located in the central part of India and borders seven other states. It has a varied topography with plateaus towards the northern and southern edges with a fertile plain in the central part. Some of the Southern tributaries of the Ganga like Rihand River and almost all of the Mahanadi basin falls within the boundaries of this state. About 44% of the land area is covered by deciduous forests and hosts unspoilt wildlife. The state also has some beautiful waterfalls, rivers and mountains that make it an attractive tourist destination. Raipur is the capital of this state and Bijapur, Bilaspur, Bhilai and Jagdalpur are the other main cities. History of Chhattisgarh The early history of Chhattisgarh region is known only through cave paintings and architectural remains, but written documents state that from the 14th century onwards, this region was under the control of the Mughals. It was later taken over by the Marathas in the 18th century and most forts that stand today date back to this period. It is during Maratha rule that the name 'Chhattisgarh' was coined, literally meaning the land of thirty-six forts. In the 19th century, it was annexed by the British and became a part of the Central Provinces. Leaders from this region were active during the revolt of 1857 and rallied the tribals against the oppressive forest policy of the British. After independence, Chhattisgarh was merged with Madhya Pradesh and granted statehood in 2000, when it became the 26th state of India.

Local Food of Chhattisgarh Though the elements, ingredients, styles of the cuisine of Chhattisgarh and its flavors might be somewhat lesser known, it is home to some of the most popular items enjoyed all over the country. Chhattisgarh is known for the richness and color in its dishes, be it hot, spicy and tangy relishes or sweet and mouth watering treasures. The treats here include a teasing and crunchy Jalebi, a zesty Rakhia Badi and a very traditional Petha. Maize, wheat and Jowar are the primary and staple ingredients here. Arhar Dal along with the special Bafauri which is prepared with Chana dals are the most popular delicacies in the state.

Kusli, Minjhra Bedi, Sabudana ki Khichdi, Cashew Barfi, Chech Bhaji, Kohda, Lal bhaji and Bohar Bhaji are the relishes that almost define the cuisine here. Other than the distinct flavors of the local cuisines, the restaurants of the Chhattisgarh also house several other cuisines to ensure you never run out of options.

Here is what travers & fans of Chhattisgarh tourism are talking about.