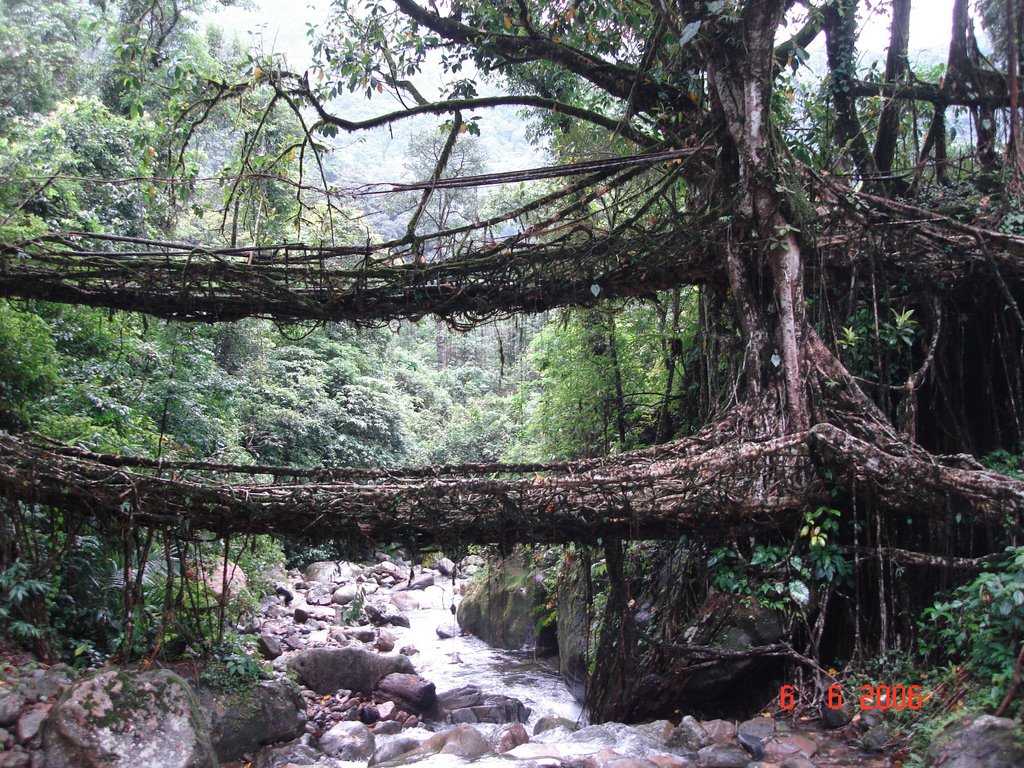 Must Visit places in Meghalaya

Meghalaya is known as "The abode of clouds". It is one of the most beautiful states in the North-East India offering a variety of sights, activities, food and festivals to the tourists. Well known for Cherapunjji, the place which receives one of the maximum rainfall in the world, Meghalaya can mesmerise you with its hills, valleys, lakes, caves and waterfalls which give it a beautiful look when covered with beautiful clouds.

One amongst the seven sisters of the North East, Meghalaya translates into the land of clouds. True to its name, the state is known receive heavy rainfalls. Spread across an area of 22,429 square kilometers, Meghalaya is bordered by Assam to the north and east, and Bangladesh towards the southern and eastern side. Regarding topography, Meghalaya is mostly plateau with steep slopes facing southwards. While the state has many lakes and waterfalls, 30% of its land is covered by forest. History of Meghalaya Little is known about the history of Meghalaya other than Khasi kingdom which is known to take up a rift between the British government when it wanted to construct a rail line through this area to connect Bengal with Assam. A treaty was signed between the two parties only to be repudiated in 1829 by the local leader following the string of resistance by the public. However, later, the local rulers submitted to the British kingdom following the confrontation. The tribal of Meghalaya continued living their lifestyle in seclusion until its leaders assented to join the independent India. In the early years, Meghalaya was under the United Provinces of Assam for administrative efficiency and management, but as demands for statehood arose, Meghalaya was awarded full statehood on January 21st, 1972.

Shillong is the capital of Meghalaya, and it is the most urbanization you will see in the entire state. Shillong has a lot of leftover British colonial influence that is evident from the plentiful British architecture. Owing to the magnificent lakes all around the town, and the hills surrounding it, Shillong has often been called the Scotland of the East. The Umiam Lake (also known as the Barapani Lake), is one of the primary reasons why Shillong is compared to Scotland, as the lake with rocky hills in the backdrop is reminiscent of Scotland's Loch Lake. Umiam Lake offers various water sports activities for tourists.

Cherrapunji is famous for its rainfall, and it used to be the wettest place on Earth before the title was taken over by Mawsynram, which is less than 100 kilometers away from Cherrapunji. The city abounds in waterfalls, the most important ones Nohkalikai and Seven Sister Falls. The living root double-decker bridge is a famous attraction in Cherrapunji, where trekking and hiking activities are offered for tourists.

Mawlynnong - If you want to take a look at Asia's cleanest village, don't forget to visit Mawlynnong. Lying on the border separating India from Bangladesh, Mawlynnong is an amazingly clean village in Meghalaya where each and every street corner has a bamboo dustbin to ensure nature-friendly disposal of trash. The focal point of attraction of this village is the Sky Watch, which is a bamboo structure that offers sweeping views of the Bangladeshi plains from the top.

The natural beauty of Meghalaya. and less commercialization. Couples can plan a romantic getaway in the city, families can head to Meghalaya

The state is considered a sensitive zone for ethnic and political tension. While the tourism industry is starting to gain momentum in the northeast, travellers can face issues in communication and food choices because of the difference in lifestyle and eating habits.

the Festivals of Meghalaya is  Music and Dance The Garos of Meghalaya celebrate life in full spirits. The local folklore has special songs which are sung on auspicious occasions making use of instruments like pipes, drums, flutes and cymbals. The local dance forms include various dances like Lahoo Dance, Doregata and Pomelo Dance. The Doregata Dance is a teasing dance form in which women attempt to knock off their male counterparts' turbans with their heads. If they succeed, it's followed by celebrating the victory with cheer and laughter.

Local Festivals of Meghalaya Meghalaya celebrates Wangala in the month of November every year. Often referred to as the dance of a hundred drums, the festival marks the end of the period of labour in the hope of yielding a good harvest. Men, women and children from all age groups dress up for the festival and rejoice by dancing on the beats of long cylindrical drums. Dedicated to Satyong, the local god of fertility, Wangala is celebrated across Meghalaya for a duration of one week.

The people of Meghalaya are hardworking, cheerful and sociable. They have three tribes inhabit Meghalaya namely Garo (Tibetan who live in western Meghalaya), Khasi (live in central part) and Jayantia (live in eastern part of Meghalaya). The unique thing about their society is that they follow matrilineal system which means that the inheritance goes to the women of the house and the men are married into women's families as a result of which the children bear the surnames of their mothers.

Maximum people follow Christianity whereas Hinduism and Buddhism are also practised by the people. Music, drumbeats and dances are the most important part of the life of Meghalayan people as they are very passionate about their music, dance and culture. You will be spellbound by their art of weaving and carving.

The local food and cuisine of is liberal, surprising and tinted. The food is simple and mild but an almost staple dash of spice and unique ingredients. Rice with spicy meat and fish preparations is the staple food of people in Meghalaya. Ferment rice beer usually accompanies religious rites and major ceremonies and celebrations. Tungtab, Dohshaiin, Jadoh, Red rice, Makham-Bitchi, Dohneiihong and Kappa are the delicacies that are almost constant in a traditional and authentic Meghalayan cuisine, so are the vegetarian options Daineiiong, Jhur Sideh, and Muli Khleh.

Here is what travers & fans of Meghalaya tourism are talking about.

RT @NortheastToday: #Photogram | The wonders of nature??? ?? Meghalaya @meghtourism @incredibleindia @tourismgoi #Meghalaya #Meghalayatour?
Comment below for more details and don?t forget to use #holidayscrowd to get featured with us. ? #northeastindia? https://t.co/XMZTU5A6a7
RT @PraWin_Official: #Nature #Naturelover #Naturebeauty #NaturePhotography #Waterfall #Meghalaya #MeghalayaTourism #Beautiful #Droneshot #D?
Short trip to #shillong #meghalaya #meghalayatourism https://t.co/KTwgF4L8FH
RT @carrnivaltrips: 6Nights And 7 Days Meghalaya Tour Packages With Kaziranga And Cherrapunjee - Best offers from Carrnivaltrips https://?
Just a glimpse of the beautiful wilderness I saw at #Mawlynnong. Abundance and how. The village felt like a fake? https://t.co/MCA5vqRbup
Again Credit to the us. But really feel good when our entire team delivered their FULL and client enjoy their every? https://t.co/YbIftUtBus
#Photogram | Winter morning scene from #Meghalaya ??? ?? Meghalaya #meghalayatourism #meghalayadiaries? https://t.co/giO5hDmVIN
RT @deptoftextiles: Take a cultural tour through the community and experience the unique age-old weaving traditions of Umden. To book an?
Recharge your energy and feelings with travel?? . . ?? Save this post for your next visit to Meghalaya?? . .? https://t.co/JotlL3ohKD